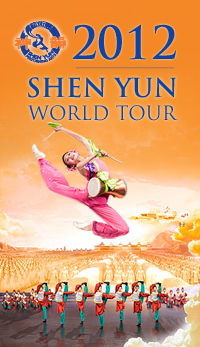 Friday night, 7:30 pm CST, at AT&T Preforming Arts Center’s Winspear Opera House in Dallas, the curtain will rise on a whole-new show. Shen Yun’s New York Company will take the stage first. On December 19, Shen Yun’s International Company will open its season at Ottawa’s National Arts’ Centre, and Touring Company will perform at Waterbury’s Palace Theater in Connecticut on the 26.

The all-new 2012 program takes the company’s mission of reviving 5,000 years of civilization to new heights. This year’s performances continue to explore themes like loyalty, compassion, and spirituality that are at the heart of traditional Chinese culture.

Ancient Chinese stories will be brought to life through classical Chinese dance, and numbers will be performed in a variety of Chinese ethnic and folk dance styles. Dynamic digital projections, soaring arias, brilliant costumes, and all-original scores for full orchestra accompaniment are also completely new.

We invite you to discover for yourself why so many people are excitedly talking about Shen Yun’s new season. Here is some of what audience members have been saying about Shen Yun performances.

Bring your friends and family and go on a journey together. We look forward to seeing you in the audience!

Find a performance near you at our tickets page.

Ottawa Celebrates Holidays with Chinese Dance and Music
Following the lead taken by some media and other organizations, we are now also referring to the coronavirus as "the CCP virus," as it is the Chinese Communist Party's mismanagement and cover-up that has led to the global pandemic.