Back News > Discovering Chinese Instruments: The Pipa Plucked from the Heavens

Discovering Chinese Instruments: The Pipa Plucked from the Heavens

SO DELICATE IT CAPTIVATES, SO POWERFUL IT PENETRATES—THE PIPA CONJURES CELESTIAL MELODIES

At its height of popularity some thirteen hundred years ago, the pipa was a regular at the Tang Dynasty court. Indeed, for thousands of years, the pipa reigned as “the King” of Chinese instruments. The Chinese lute gained its regal title from its wide array of playing techniques, expressive depth, and dominance in both folk music and legend.

Ancient murals in the Dunhuang Caves along the Silk Road depict this instrument in the hands of heavenly maidens. The celestial music plucked from their delicate fingers drifts down to Earth like fluttering flowers. 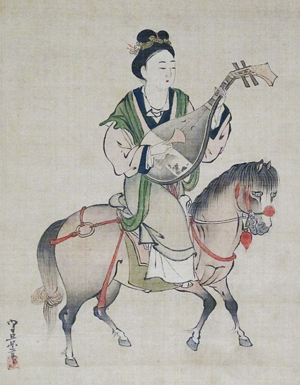 Its onomatopoeic name is derived from its two most basic techniques— “pí” (琵) strike outwards and "pá" (琶) " strum inwards. In reality, though, dozens of more techniques are regularly employed, making it one of the most difficult ancient instruments.

Some of these techniques—glissando, vibrato, pizzicato, and portamento, to name a few—are also familiar to Western string musicians. The pipa’s wooden body can also be drummed upon, and its strings twisted to create a cymbal-like sound. With this range of expression, pipas can create a myriad of musical auras­—from enchanting melodies to thrilling battle narratives.

Ninth century poet Bai Juyi thus eulogizes its mesmerizing qualities in his “Song of the Pipa”:

Its bold cords thunder like a vehement storming,
Its fine strings hum as whispers so lulling,
Loud tones and soft, mingling and bouncing,
Like pearls large and small, onto a jade tray tumbling.