Are you a leader or one of the sheep? Turns out, if you’re born in the Year of the Sheep, or Year of the Goat (or even Ram, there’s no clear distinction here in Chinese), you could be either—or neither—as we’ll find out by shearing through Chinese history to uncover the most prominent goat-sheep personages. 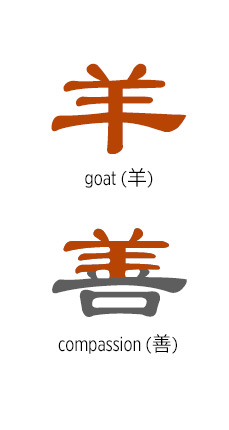 The Chinese zodiac has a 12-year cycle, with each assigned a different animal. This new lunar year, which begins February 19, is the Year of the Goat. Generally speaking, people born in this zodiac (2015, as well as 2003, 1991, 1979, etc.) are generous, kind, and loyal—just like sheep. In fact, the character for goat, or yang (羊), is even part of the Chinese word for compassion, shan (善), expressing the gentle nature of this animal.

Indeed, historically speaking, these fuzzy friends have helped us in various ways. Their wool is used for clothing; their milk for food. And, in ancient China, soft goat-hair brushes worked in tandem with stiffer wolf-hair brushes to create master works of painting and calligraphy.

Not all ovine are created equal, of course, and as you’ll see, goat people can run the gamut from magnanimous to megalomaniac. 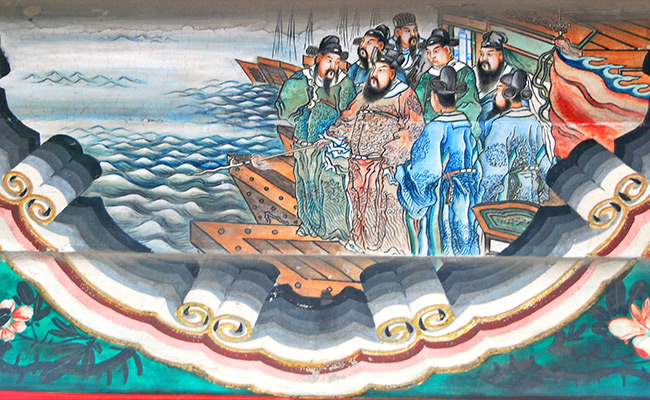 If you think all sheep are like lambs, you will reconsider once you have met the big warlord of the Three Kingdoms era (220-280 C.E.).

When the Han Dynasty collapsed, a power struggle broke out. Amidst the chaos, three powerful states emerged: Wei, Shu, and Wu. Cao Cao, ruler of Wei and a military genius, was born in the Year of the Goat (155 C.E., you can check the math). He was popular with his subordinates, but also power-hungry and marked with a vindictive streak.

When Cao Cao’s father was murdered, Cao Cao (pronounced tsao tsao) immediately blamed the most likely suspect: the governor of a neighboring province named Tao Qian. Though he had no proof, Cao Cao decided to invade Tao Qian’s province that very summer. His army massacred not only soldiers, but also some 100,000 civilians—enough to block up a river with their corpses. Villages were razed to the ground and their livestock (yes, including the sheep) were stolen to feed the army.

Cao Cao suffered from chronic migraines. All treatments failed until he met the legendary physician Hua Tuo, who stopped the pain with a single acupuncture needle. Cao Cao was so impressed that he wanted Hua Tuo to stay as his personal physician. But Hua Tuo disliked being restricted to court, and so he asked for leave of absence to tend to his (nonexistent) sick wife. The physician, however, did propose a long-term solution for Cao Cao’s headaches—a brain operation using ancient Chinese medicine techniques. The suspicious Cao Cao thought the doctor planned to murder him and, in a fit of rage, imprisoned Hua Tuo. And so the life of one of China’s most skilled doctors ended in jail.

Such acts have marked Cao Cao as a villain, and influenced his portrayal in the classic novel Romance of the Three Kingdoms. The fictional Cao Cao lived by a dog-eat-dog motto: “I’d rather wrong others than allow them to wrong me!” (寧我負人, 毋人負我!) Within the novel’s pages, he murders an old friend and his family out of paranoia, tries to backstab (literally) his boss, and nearly conquers all of China leaving a trail of fire and blood.

But he was also a remarkable statesman who left behind some of China’s finest ancient poetry. It’s no wonder that people today still remember Cao Cao through a popular idiom: shuo Cao Cao, Cao Cao dao (說曹操, 曹操到) “Speaking of Cao Cao, and there he is,” the Chinese equivalent of “Speaking of the devil.” 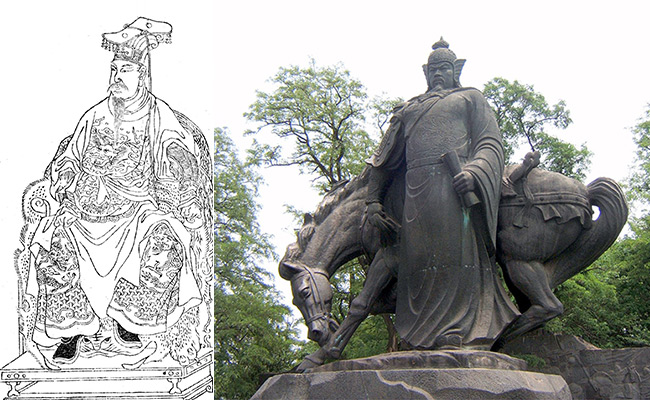 Thankfully, for every black sheep, there’s a white one that embodies the zodiac’s virtues. This honor belongs to Yue Fei, a courageous general from the Song Dynasty (906-1279 C.E.).

Yue Fei was born to a poor family, and grew up to join the army, where he excelled at archery, tactics, and spear-wielding. During the twelfth century, China was constantly invaded by the Jurchen from the north, and Yue Fei’s skills eventually earned him the position of a leading general tasked with defending the Middle Kingdom.

Charismatic and popular with his men, Yue Fei always put duty to his country first. Legend has it, he asked his mother to tattoo four characters on his back—jin zhong bao guo (精忠報國), “Serve the country with utmost loyalty”—so that he would never forget his purpose. His battlefield skills earned victories for the Song and begrudging admiration from his enemies. 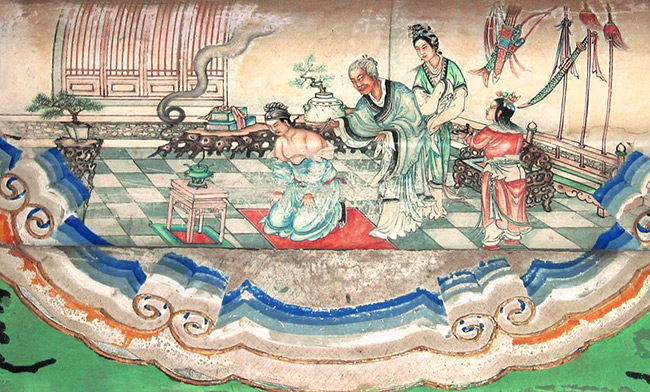 Despite his fame and accolades, he held dear the Confucian principles of filial piety, humility, and subordination. Twice he retired from the battlefield to observe mourning rites for his parents. Once he camped an entire winter to grieve by the grave of his teacher, a famous martial arts master, until his friends finally dragged him home.

Tragically, Yue Fei’s popularity irked an odious chancellor named Qin Hui. This official tricked the emperor into thinking that Yue Fei was plotting a coup and had him recalled from the front on charges of treason. Ever loyal, Yue Fei obeyed the summons out of respect to the emperor—even though he knew it was a trap. When Qin couldn’t find evidence to convict Yue Fei, he executed him anyway.

When asked whether Yue Fei was actually guilty, Qin Hui replied mu xu you (莫須有), meaning, “I don’t know for certain, but maybe he did something.” Qin Hui’s phrase is now used to mean “fabricated charges.”

History saw justice served, and today, the loyal general Yue Fei has a majestic statue in a temple dedicated to his honor. Right outside sits a statue of Qin Hui, kneeling and bound in chains for generations of passersby to spit on. (And, yes, this is the same Qin Hui depicted in last year’s comical Shen Yun dance “Sweeping Out the Tyrant.”) 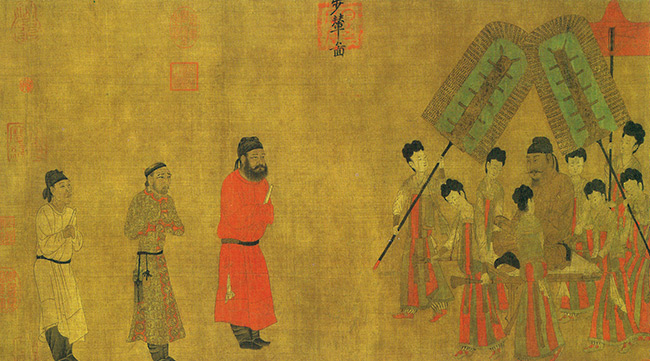 When asked to identify the golden age of Chinese civilization, many historians point to the mighty Tang Dynasty (618-907 C.E.). The Tang people (a name used today to describe all Chinese), thrived under a burgeoning economy with a vibrant trade route. The beloved Emperor Tang Taizong, also born in the Year of the Goat, had much to do with this success.

During the height of his reign, Tang China was one of the world’s largest, strongest, and most cosmopolitan nations. Its land covered present-day China, Vietnam, and Central Asia. In the capital city of Chang’an, meaning “The City of Eternal Peace,” foreigners and locals rubbed shoulders, traded, and were colleagues in the imperial court. Travelers could cross the country in absolute safety, and innkeepers even offered free room and board. It was a time of prosperity and peace.

Taizong was a unique emperor with a magnanimous, forgiving heart. After acceding to the throne, he pardoned his enemies and even offered them positions in his royal court.

And it was Emperor Taizong who famously asked the Buddhist monk Xuanzang to journey westward in search of sacred scriptures. The monk successfully returned with them to China, changing the face of Chinese Buddhism forever. His adventures were then fictionalized in the classical novel Journey to the West (involving a monkey and a pig, but not a goat).

What a difference a thousand years make. By the turn of the nineteenth century, toward the end of the Manchurian-ruled Qing Dynasty, Empress Dowager Cixi (1835-1908) was in power. Whereas the Tang was open to foreigners of all ethnicities and religions, Empress Dowager was strongly suspicious of outsiders.

Born in the Year of the Goat to an ordinary official, she became the emperor’s concubine and gave birth to a son, who, in turn, became emperor. Her son was on the throne in name only, while she was the one who spearheaded the regency for 47 years.

During a time of great instability, Cixi held her own in the Manchu-dominated court. She kept a death grip on Qing politics and refused to yield to anyone, even her closest allies. Despite her hard stance, those who met her praised her graceful movements, charming presence, and kindness. Even after retiring from rule, she held tea parties for the wives of diplomats, as well as annual garden parties at the Summer Palace.

Two warriors—one cruel, one heroic. Two rulers—one compelling, one controlling. From the curious little lamb to the mighty mountain goat, not all sheep are cut from the same wool.

But when the conversation turns to the Chinese New Year, you can now discuss the Year of the Goat without feeling sheepish.

TAKE THE QUIZ: find out which of these four goats you most resemble.

Ancient Lifehack: How to ‘Winterize’ Your Body

A Performance Marathon in San Diego