Back Blog > A Snowy Hill, a Stranded Bus

A Snowy Hill, a Stranded Bus

We have a problem. 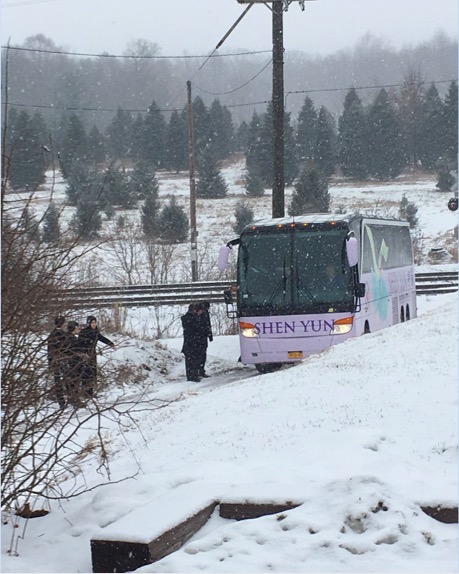 A weird sensation came over me. As I awoke from the four-hour bus ride, I realized that we were sliding down a hill. Except… we were sliding backwards. I looked out the window, and saw a thin layer of ice and snow covering the road.

The bus driver made a few more attempts to get up the hill, but each time we just slowly slid back down. Then, our orchestra manager instructed all of us to stand at the back of the bus and have the driver try again. But after two more attempts, we were still in the same place—the bottom of the hill.

After consulting with the bus driver, the inevitable happened. “Okay, everyone, we’re getting off the bus,” our orchestra manager announced, adding, “Be careful on the slippery road!”

And so, we departed the warm and cozy bus and forged into the cold winter. On the left side of the road, there was a hill. And on the hill stood a house.

We carefully waddled across the road and stood beside it. With the bus emptied, we hoped that this time the problem would be solved. But the slope and the ice were still too much for the bus.

While we were waiting, cars drove through on the other side of the road. Seeing our predicament, some wished us good luck, some were concerned, some cursed. But we kept our peaceful attitude and prayed for our bus to overcome this obstacle.

Then a lady who lived in the house beside the road invited us to walk closer to her house so we wouldn’t be right on the road. We thanked her and moved on to her driveway.

As we watched the bus struggling with the hill, it was soon decided that guys would push the bus. And so they went. We could tell they tried very hard, but... it didn’t work.

Meanwhile, we stood on the hill, hair and clothes covered by a thin layer of snow.

Seeing that we’d been standing in the cold for a while, the lady then kindly offered us to wait inside her house. Not wanting to be too much trouble to her, we thanked her and politely declined. We then gave her a small Shen Yun calendar card, told her about Shen Yun and that we were members of the orchestra. She complimented us on the beauty of the card and thanked us.

Finally, it was decided that the bus would take another route, and we were called back on the bus. We bade her goodbye and thanked her for her kind offers. She warmly said to us, “God bless you,” and wished us good luck with our travels. From the bus, we waved the good lady one last goodbye.

We drove off on another route and continued our journey. Now mostly wet from the snow, I reflected upon what just happened and realized that the pleasant encounter with this lady was like a warm ray of sunshine, piercing through the winter cold.

Mark Your Calendars for the Year of the Mouse!

On Tour Daily Diary
Following the lead taken by some media and other organizations, we are now also referring to the coronavirus as "the CCP virus," as it is the Chinese Communist Party's mismanagement and cover-up that has led to the global pandemic.